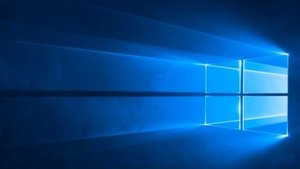 I like to imagine that there’s a sign someplace inside Microsoft’s HQ that tracks the number of days since the company screwed up a Windows update.
It’s time to reset the counter to zero — it has now been zero days since Microsoft rolled out a busted update to Windows 10.
A new security update is causing blue screens on computers when they attempt to use certain brands of printers, Windows Latest reports.
As if printers and Windows updates weren’t annoying enough already, they have now joined forces.

The update, known as KB5000802, began rolling out in the past few days.
There are a huge number of Windows 10 devices around the world with very diverse hardware, so a few bugs are understandable.
However, this update has sysadmins pulling out their hair.
There’s a thread on Reddit where admins are trading horror stories and trying to come up with ways to mitigate the problem.

As a security update, KB5000802 was installed automatically on many systems.
For whatever reason, spooling up printer drivers from Kyocera, Zebra, and others causes the system to crash.
Several solutions have been thrown around, but the only surefire way appears to be uninstalling the update, which is available from Settings > Update and Security > Windows Update.
You can also enter “wusa /uninstall /kb:5000802” in a command prompt.
Although, some PCs might fail to roll back the changes. 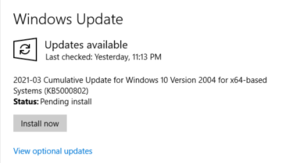 Microsoft has been repeatedly chastised for its handling of Windows 10 updates, which often install automatically and force a restart.
Microsoft gives users some modest controls, but enterprise clients can control more.
It’s just that no one expected a minor patch to break printing.
I’ve also personally seen the KB5000802 update cause repeated application crashes.

Usually, this is where I express a solemn desire that Microsoft gets it together and fixes Windows updates, but I think I’m past hoping.
Windows 10 turned five this past year, and Microsoft still rolls out buggy updates on an almost weekly basis.
It might be time we accepted this is just how Windows works.
There’s so much institutional momentum behind Windows at this point, it may not be possible to make the necessary changes to stabilize and streamline the OS.
Yeah, it’s a depressing thought. A new security update is causing blue screens on computers when they attempt to use certain brands of printers. As if printers and Windows updates weren't annoying enough already, they have now joined forces.

Been a while since this has happened. Last time I remember was back with Windows 7 which was also a printer issue.

According to Microsoft, the cumulative updates released today are addressing "an issue that might cause a blue screen when attempting to print to certain printers using some apps and might generate the error, APC_INDEX_MISMATCH."

The cumulative updates containing the fix released today are published as optional updates so they will not be installed automatically via Windows Update.

To install the updates manually, you have will have to open Windows Update and 'Check for updates.' You’ll then be able to directly click a link to download and install the update or go to the 'Optional updates available' area and pick it from the list.