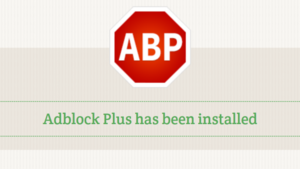 Since before the first release of Windows 10, Microsoft has been talking about their Microsoft Edge browser that is included in the new operating system.

Their goal has been to create a safer browsing experience because of all the threats that exists on the web these days and they have slowly been adding capabilities both under the hood and feature related that works towards that safer experience.

We all know that one attack vector these days when you are on the web is malware and other threats that are delivered via ads which are displayed on the webpages we visit. Most of the time the hosts of the webpages themselves are not even aware that the ads they are displaying are delivering the attack code.

One way users combat the threat of these type of ad based attacks is to use an ad blocker extension in their web browser which completely eliminates ads from displaying on their machines.

Plus, let's face it, some sites are unbearable when it comes to the number of ads they display on the page and that degrades the browsing experience as well.

We have been able to use some very basic extensions since the November Update was released last fall but there have been no ad blockers included in that handful of options.

That all changes this weekend with the release of AdBlock and AdBlock Plus to the Windows Store for Windows Insiders on Build 14322 or higher.

These two browser extensions will now allow some users to make the switch to Microsoft Edge without losing the ad blocking capabilities they have with extensions on Microsoft's Internet Explorer, Chrome or Firefox.

Be aware, AdBlock and AdBlock Plus are two different extensions so you may want to check each one out to see which best fits your style of browsing/usage. My personal choice is AdBlock Plus.

Now, if we could only get that LastPass extension for Microsoft Edge.