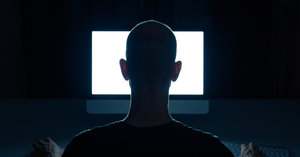 “It must be true,” many people have unfortunately thought about this new twist on an established sextortion scam. After all, he’s (apparently) sending email from your very own email address!

Good news: thankfully, it’s not true. The sextorting phisher has not, in fact, demonstrated that he’s hacked your email. All he’s done is demonstrate that anyone can send an email claiming to be from anyone else.

That’s nothing new; it’s just the way email is designed, though plenty of phishers use this fact to send spoofed email that looks like it comes from a trusted party (like you!).

We’ve seen sextortion emails that have included an intended victim’s password – that the attackers actually found in a data breach dump – in order to make their claims to have taken over somebody’s computer seem legitimate. Those passwords are typically outdated. But with the latest spin, they’re also pretending to have access to their victim’s email account, by simply spoofing the sender of the scam email to make it look like the same email as that of the victim.

The new variant of this lucrative scam was first seen targeting people in the Netherlands. RTL Nieuws reported on Thursday that the scammers had thus far bilked people of €40,000 (USD $46,000).

That way I also got access to all your contacts. I made a video that shows how you satisfy yourself on the left half of the screen and on the right half you see the video you were watching. With the press of a button I can forward this video to all contacts of your email and social media. If you want to prevent this, transfer an amount of 1000 euros to my bitcoin address (If you do not know, search with Google "Buy Bitcoin".) Bitcoin address: xxxxxxxxxxxx

As soon as the payment is received, I will delete the video and you will never hear from me again. I give you 72 hours to make the payment. Then you know what happens. I can see it if you have read the email.
Click to expand...

RTL Nieuws analyzed more than 100 of the bitcoin addresses from the emails and found that the crooks had managed to talk people out of seven bitcoins as of Thursday, making it one of the most successful extortion emails to have ever made the rounds in the Netherlands.

It’s not hard to believe that a hacker could take over your microphone and webcam, after all: Crooks can use a piece of malicious software called a remote access trojan (RAT) to take over your computer, record your conversations, and yes, to turn on your webcam and microphone to spy on you.

Victims of sextortionists have included those as famous as Miss Teen USA: Cassidy Wolf was blackmailed by a crook who used a RAT known as “Blackshades” to take nude pictures of her through her webcam.

We’ve seen plenty of stories about hijacked baby monitor webcams, too, and we’ve seen one couple who didn’t realize that they’d been joined by a peeping Tom who spied on them via their webcam as they snuggled together to watch Netflix.

Couple the too-real threat of RATs and hijacked webcams with an email that looks like it came from within your very own email account, and it’s easy to see how people can get strung along.

Have not seen this on in a while.

I get 3 or 4 of these everyday to an email address I rarely use.

Here is the content of the email. The Darknet username changes.

My nickname in darknet is lonnard80.
I hacked this mailbox more than six months ago, through it I infected your operating system with a virus (trojan) created by me and have been monitoring you for a long time.

If you don't belive me please check 'from address' in your header, you will see that I sent you an email from your mailbox.

Even if you changed the password after that - it does not matter, my virus intercepted all the caching data on your computer and automatically saved access for me.

I have access to all your accounts, social networks, email, browsing history.
Accordingly, I have the data of all your contacts, files from your computer, photos and videos.

I was most struck by the intimate content sites that you occasionally visit.
You have a very wild imagination, I tell you!

During your pastime and entertainment there, I took screenshot through the camera of your device, synchronizing with what you are watching.
Oh my god! You are so funny and excited!

I think that you do not want all your contacts to get these files, right?
If you are of the same opinion, then I think that $502 is quite a fair price to destroy the dirt I created.

Otherwise, these files and history of visiting sites will get all your contacts from your device.
Also, I'll send to everyone your contact access to your email and access logs, I have carefully saved it!

Since reading this letter you have 45 hours!
After your reading this message, I'll receive an automatic notification that you have seen the letter.

I hope I taught you a good lesson.
Do not be so nonchalant, please visit only to proven resources, and don't enter your passwords anywhere!
Good luck!
Click to expand...