Cortana On Windows 10 Is About To Get More Powerful 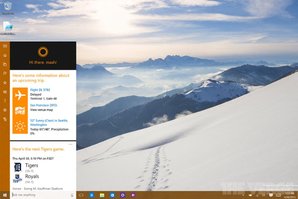 When Cortana first arrived in Windows 10 preview builds, it was rough. Features, general usability, and the look and feel was really early, but Microsoft has been steadily improving things ever since. The software giant is now testing out even better ways of bringing some of the popular features of Cortana from the phone over to the PC.

During a media event at Microsoft Build today I got a closer look at some of the changes coming over the next few weeks. Microsoft is heavily tweaking the Cortana user interface and more closely integrating it into the Start Menu and general Windows 10 experience.

Some small, but noticeable, changes include new Cortana animations as you activate the digital assistant. If you use the "hey Cortana" command then a miniature version of Cortana appears while it dictates commands. The look and feel of Cortana is steadily improving alongside these changes, and even the recent public preview builds of Windows 10 show some of that progress. Elsewhere, Microsoft is simply improving on what Cortana can do within the Microsoft Edge browser or from a phone running Windows 10. New commands in Microsoft Edge include calculations and the ability to look up even more data from within the address bar.

Of particular interest is some work Microsoft is doing with Uber. While the company is integrating Uber into its calendar for Outlook, it's going a step further with Cortana. Microsoft is planning to suggest Uber rides within Cortana alongside transit information to help Windows Phone users decided which mode of transport they want to use for appointments.

It's an interesting progression of how Microsoft has engineered Cortana, and the company's plans for the digital assistant. Extending Cortana to other apps and services is key if Microsoft wants it to become something every Windows 10 user relies on. Most of these changes will show up in new preview builds of Windows 10 in the coming weeks, and the new interface improvements will arrive first.