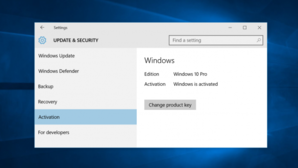 Upgrade your Windows 7 and 8.1 systems to Windows 10 first so that your activation is taken care of.

It has been a whirlwind 36 hours or so as Microsoft began rolling out Windows 10 in time zones around the world as they hit midnight on 29 July 2015. It reminded me of New Years Eve and how they show footage from those countries as midnight strikes with the fireworks and other events.

Social media was like that on Windows 10 Eve as I sat at my computer prepping for the launch here from my home base on the North East coast of Florida. Once midnight arrived here that seemed to be Redmond’s trigger and they released all of the paraphernalia and content relating to Windows 10 from their hidden coffers.

Prior to 29 July our understanding of the Windows 10 roll out was that it would be a staggered approach with Windows Insiders receiving the update first and then those with reservations getting the upgrade in the following days.

Ultimately, it would be made available to everyone using Windows 7 and 8.1 whether they ever made a reservation or not.

Well instead of all that Microsoft went ahead and made a tool available to create Windows 10 installation media that allowed anyone to do an in place upgrade to Windows 10 or create an installation USB drive for use on other computers.

That literally opened the floodgates and a lot of individuals began the upgrade process.

Along the Windows 10 development path one area that we have had very vague info is the activation process when we upgrade those Windows 7 and 8.1 devices with the free Windows 10 upgrade. Everyone seems to be asking where is my product key for the upgrade? because that is how we did it with past versions of Windows.

Well this is another area that Windows 10 is changing when it comes to the way we look and use Windows.

We already know that the new concept of Windows as a Service (WaaS) with the steady flow of new features and fixes is different than the old process of releasing big Service Packs every year. We have also heard a lot about the the pros and cons of mandatory updates for Windows 10 Home users.

Then when it comes to installing Windows we have all believed the only way to upgrade from one operating system to another is through a clean install process. Well with Windows 10 this is also changing and I want to focus on that for the remainder of this article.

We have no doubt spent a lot of time talking about the various scenarios around upgrading your current Windows installation to Windows 10.

Our comments are full of questions from you about these situations and you want to understand how it all works – we all do. While we have tried to answer every possible variation you have asked about I want to step this conversation down to generics about Windows 10 installs and upgrades.

All of the information to follow is based on what I have learned over the last couple of days in performing my own upgrades from Windows 7 and 8.1 to Windows 10 and talking with other industry experts.

Second – you must be upgrading to the same edition (Home/Pro) and architecture (32/64 bit) that matches the Windows 7 (SP1) or 8.1 system you are updating.

Third – Backup your data before attempting any upgrades because you never want to discover you do not have a backup when you actually need one.

Fourth – the process I am detailing below is for consumer versions of Windows (both retail and OEM). Volume Licensing customers have their own keys that are used to activate their upgrades to Windows 10.

The process below has worked for me on a Windows 7 desktop (home built) and a Windows 8.1 laptop (HP Spectre x360). The key step in each of these installations was that I did an in place upgrade to Windows 10 first.

This is because Microsoft is handling the activation of your free Windows 10 upgrade differently and why we are not seeing Windows 10 product keys being distributed to activate the new installations. That initial upgrade is apparently a key element of the activation and validation process.

I may be oversimplifying this but keeping it simple is usually the best option.

The basic process is that when you perform an upgrade to Windows 10 over a genuine Windows 7 or 8.1 system an anonymous and unique hardware hash is generated that is based on your systems hardware configuration. Since it is anonymous that is why you do not have to use a Microsoft Account and this hardware hash is generated even if you choose to install Windows 10 with a Local Account.

That same hardware hash is sent to Microsoft servers and a corresponding certificate is created to validate your systems activation status. From this point forward any future installs, including one where you delete all partitions and install Windows 10 from scratch, will be activated because of that unique hardware hash and the corresponding certificate. Since it is all stored on Microsoft’s servers there is no reason for us to keep a backup either.

On both of the systems I mentioned earlier I accomplished this by first downloading the Windows 10 Installation Media creation tool from Microsoft and selecting Upgrade this PC option to begin an in place upgrade. The Windows 10 update that downloads from Windows Update using the Get Windows 10 app performs an in place upgrade as well. Just keep to the same edition and architecture as I mentioned in my second point earlier.

For those of you worried about clean installs at this point there is an option with both of these methods to choose what you keep on your system – all of your files and apps, personal files only or nothing.

Selecting nothing will give you a brand new activated Windows 10 install that does not contain any of your previous operating system in it – a clean install for all intents and purposes. Plus it is an upgrade that will create the hardware hash for activation now and in the future.

After letting that upgrade run its course each of those systems were now properly activated with Windows 10.

For most of you that will be the end of the upgrade road since you are activated with Windows 10. Your unique hardware hash has been created so in the future, if you have to reinstall Windows 10, you do not need to go backwards to Windows 7 or 8.1 and then to Windows 10 to be activated.

However, for those of you interested in a clean install onto clean hard drives keep reading.

Right after upgrading these same systems I grabbed my Windows 10 installation media USB drive and I performed the ultimate in clean installs on each of them by removing all of the system drive partitions. That meant no residue of my past installation of Windows 7, 8.1 or the upgrade to 10 were left behind. That also meant no activation certificate based on my hardware hash was left on the hard drive as well.

I proceeded with the Windows 10 installation and anywhere it asked me for a product key I selected the Skip this step option to continue. You will go through the normal Out of the Box Experience (OOBE) through this to set some of your options including connecting to a network, using a Microsoft Accounts, setting a PIN and a few other items.

Once I was in the fresh and clean Windows 10 install I headed into Settings>Update & security>Activation to find the system properly activated. That means my hardware, because it had not changed of course, generated the same hardware hash as before and subsequently allowed the system to be activated.

Future hardware updates may require that you need to reactivate Windows 10 because the hardware hash will have changed but we used to do the same thing in Windows 7 and 8.1 so I expect that will be a similar process in Windows 10. Reactivation should also update your hardware hash for future installs and activations.

This activation process should work for the lifetime of that device and allow you to reinstall Windows 10 if necessary without activation issues or the need for a product key.