Microsoft Edge gets a dark theme in latest Windows 10 leak 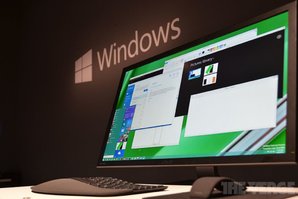 Microsoft is close to finalizing Windows 10, and a newly leaked build today shows off some of the last-minute changes that are being added before the July 29th launch. Microsoft's Edge browser now has its new logo in build 10147, complete with a new look.

You can enable a special dark mode theme in Edge’s settings, allowing you to transform the browser to be easier on your eyes. It, obviously, doesn’t modify web page content, but it does darken out all of the chrome around Microsoft Edge.

Elsewhere, there are plenty of signs that Microsoft is drawing close to a release. Several long-standing bugs have been fixed, including issues with the picture password at login. If you’re familiar with the Windows 10 preview then you’ll be glad to hear that the weird explorer restart bug also appears to have been addressed.

Microsoft is making minor UI tweaks here and there, too. Tablet mode seems to pop into place more efficiently, and Cortana no longer takes over the tablet interface. Icons for Mail, Film & TV, and Music all appear in black and white. That could be part of Microsoft’s progressive light and dark themes in Windows 10, but it’s noticeable against colorful icons for Xbox, Excel, and other apps. Microsoft has also added its new phone companion app to this latest Windows 10 preview. While it launches, the placeholders for access to apps like Cortana, Office, and OneDrive on iOS and Android are not available just yet. Phone companion is designed to compliment any smartphone, and Microsoft is using it as a way to direct phone owners to download Microsoft phone apps that work well with Windows 10.

Speaking of directing Windows 10 users towards Microsoft apps and services, there are two new additions to this build that do exactly that. "Get Office" and "Get Skype" appear in the all apps menu on Windows 10 build 10147, and both direct users to download Office and Skype.

Overall, it’s clear Microsoft is close to finishing off Windows 10, and this latest leaked build represents most of what we’ll see on July 29th. However, Windows 10 is a work in progress so expect to see many changes over the coming months as we head towards the end of the year.