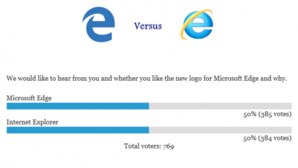 In last weeks poll question we asked you to tell us if you preferred the logo from Internet Explorer or the new Microsoft Edge that was unveiled, along with Project Spartan's new name, during Build 2015 in San Francisco a couple of weeks ago.

Surprisingly the results were almost a 50/50 split with the Microsoft Edge logo edging out the IE logo by just one vote - 385 to 384.

I am surprised because many whom I have spoken to on social media about this logo find it very jarring which, when you think about it, might be Microsoft's intent.

There are certainly more edges in the new logo which I guess makes sense with a name like Microsoft Edge.

We did have one commenter, duk3togo, point out that the logo spells out the name Edge. After asking for some clarification of how it appears I can now see it.

Well the E is obvious the as you go counterclockwise you'll see the D like upside down the G is the white space goes from the back middle around the bottom to the front middle and then the E again.

Can you see it? I don't know about you, but now that I have seen it, this is just like seeing the arrow in the FedEx logo - I can not unsee it.

Now I see why they named the new browser, edge.

I do like the new logo. The old IE logo is a little long in the tooth.

Really took a Graphic genius to design that one.