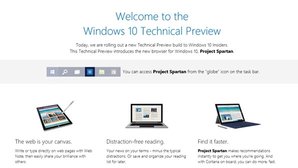 The wait is over.

Microsoft has been teasing the capabilities of Project Spartan for months. Those that have held their breath with news of each new Build release can finally exhale. Today, Microsoft is rolling out a brand new Windows 10 build to Fast Ring Windows Insiders, build 10049.

And, this one is all about Project Spartan.

There are some fixes for known issues and some improvements, but the primary reason this new build is releasing so quickly after build 10041 is so Windows Insiders can finally get a chance to test the browser Microsoft is pinning its web future on.

Build 10049 is propagating now and should be available everywhere within the next hour or so. Project Spartan allows you to write or type directly on web pages, touts distraction-free reading, and integration with Cortana to make recommendations on-the-fly.

Today's new Build comes with its own set of gotchas, which is common for a Technical Preview (read: beta software). Microsoft has already provided the things to watch out for in an accompanying blog post. Those are:

I got the update on my laptop and now I have to look for it. Very interested in it.

Updated to the new preview build this evening.
I did try the new 'Project Spartan', but to be honest I rely heavily on my Firefox Addons..... so this won't really work for me.