The evolution of a Mac trojan: UpdateAgent’s progression

Our discovery and analysis of a sophisticated Mac trojan in October exposed a year-long evolution of a malware family—and depicts the rising complexity of threats across platforms. The trojan, tracked as UpdateAgent, started as a relatively basic information-stealer but was observed distributing secondary payloads in the latest campaign, a capability that it added in one of its multiple iterations. Reminiscent of the progression of info-stealing trojans in other platforms, UpdateAgent may similarly become a vector for other threats to infiltrate target systems.

Since its first appearance in September 2020, the malware displayed an increasing progression of sophisticated capabilities, and while the latest two variants were sporting much more refined behavior compared with earlier versions, they show signs that the malware is still in the development stage and more updates are likely to come. The latest campaign saw the malware installing the evasive and persistent Adload adware, but UpdateAgent’s ability to gain access to a device can theoretically be further leveraged to fetch other, potentially more dangerous payloads.

UpdateAgent lures its victims by impersonating legitimate software and can leverage Mac device functionalities to its benefit. One of the most advanced techniques found in UpdateAgent’s latest toolbox is bypassing Gatekeeper controls, which are designed to ensure only trusted apps run on Mac devices. The trojan can leverage existing user permissions to quietly perform malicious activities before deleting the evidence to cover its tracks. UpdateAgent also misuses public cloud infrastructure, namely Amazon S3 and CloudFront services, to host its additional payloads. We shared our findings with the team at Amazon Web Services, and they have taken down the malicious URLs–another example of how intelligence sharing and collaboration results in better security for the broader community.

Threats like UpdateAgent are proof that, as environments continue to rely on a diverse range of devices and operating systems, organizations need security solutions that can provide protection across platforms and a complete picture of their security posture. Microsoft Defender for Endpoint delivers and coordinates threat defense across all major OS platforms including Windows, macOS, Linux, Android and iOS. On macOS devices, Microsoft Defender for Endpoint detects and exposes threats and vulnerabilities through its antivirus, endpoint detection and response (EDR), and threat and vulnerability management capabilities.

In this blog post, we share the evolving development of the UpdateAgent trojan targeting Mac users and detail the malware’s recent campaign to compromise devices, steal sensitive information, and distribute adware as a secondary payload.


UpdateAgent is uniquely characterized by its gradual upgrading of persistence techniques, a key feature that indicates this trojan will likely continue to use more sophisticated techniques in future campaigns. Like many information-stealers found on other platforms, the malware attempts to infiltrate macOS machines to steal data and it is associated with other types of malicious payloads, increasing the chances of multiple infections on a device.

The trojan is likely distributed via drive-by downloads or advertisement pop-ups, which impersonate legitimate software such as video applications and support agents. This action of impersonating or bundling itself with legitimate software increases the likelihood that users are tricked into installing the malware. Once installed, UpdateAgent starts to collect system information that is then sent to its command-and-control (C2) server.

Notably, the malware’s developer has periodically updated the trojan over the last year to improve upon its initial functions and add new capabilities to the trojan’s toolbox. The timeline below illustrates a series of techniques adopted by UpdateAgent from September 2020 through October 2021: 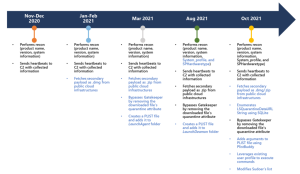 
In the October 2021 campaign, UpdateAgent included a larger set of sophisticated techniques than ever previously observed. The attackers distributed the trojanized app in .zip or .pkg format, conforming with a campaign observed in early 2021:

Upon analyzing UpdateAgent’s infrastructure, we determined that the infrastructure used in the October 2021 campaign was created at the end of September 2021, and we also discovered additional domains with payloads. This indicates that the trojan is still in the developmental stage and is likely to add or modify its capabilities in future updates and continue its track of improving its overall level of sophistication.

We further observed two separate variants of the UpdateAgent trojan in its October 2021 campaign. Each variant leveraged different tactics to infect a device, as detailed below:


The first variant of UpdateAgent takes the following steps to infect a device:


The second variant of UpdateAgent takes the following steps to infect a device:


UpdateAgent is further characterized by its ability to fetch secondary payloads that can increase the chances of multiple infections on a device, with the latest campaign pushing adware. We first observed UpdateAgent distributing adware as a secondary payload in its October 2021 campaign, identified as part of the Adload adware family by Microsoft Defender Antivirus.

Similar to UpdateAgent, adware is often included in potentially unwanted or malicious software bundles that install the adware alongside impersonated or legitimate copies of free programs. In Adload’s case, we previously observed the adware family targeting macOS users had spread via rogue installers often found on malicious websites.

Once adware is installed, it uses ad injection software and techniques to intercept a device’s online communications and redirect users’ traffic through the adware operators’ servers, injecting advertisements and promotions into webpages and search results. More specifically, Adload leverages a Person-in-The-Middle (PiTM) attack by installing a web proxy to hijack search engine results and inject advertisements into webpages, thereby siphoning ad revenue from official website holders to the adware operators.

Adload is also an unusually persistent strain of adware. It is capable of opening a backdoor to download and install other adware and payloads in addition to harvesting system information that is sent to the attackers’ C2 servers. Considering both UpdateAgent and Adload have the ability to install additional payloads, attackers can leverage either or both of these vectors to potentially deliver more dangerous threats to target systems in future campaigns.


UpdateAgent’s evolution displays the increasing complexity of threats across platforms. Its developers steadily improved the trojan over the last year, turning a basic information-stealer into a persistent and more sophisticated piece of malware. This threat also exemplifies the trend of common malware increasingly harboring more dangerous threats, a pattern also observed in other platforms. UpdateAgent’s ability to gain access to a device can theoretically be leveraged by attackers to introduce potentially more dangerous payloads, emphasizing the need to identify and block threats such as this.

Defenders can take the following mitigation steps to defend against this threat:


As organizational environments are intricate and heterogenous, running multiple applications, clouds, and devices, they require solutions that can protect across platforms. Microsoft Defender for Endpoint offers cross-platform security and a unified investigation experience that gives customers visibility across all endpoints and enables them to detect, manage, respond, and remediate threats, such as the capability to detect UpdateAgent’s anomalous use of PlistBuddy.

Microsoft Defender for Endpoint customers can apply the following mitigations to reduce the environmental attack surface and mitigate the impact of this threat and its payloads:


Defender for Endpoint’s next-generation protection reinforces network security perimeters and includes antimalware capabilities to catch emerging threats, including UpdateAgent and its secondary payloads, C2 communications, and other malicious artifacts affiliated with the trojan’s reconnaissance activities. Moreover, macOS antimalware detections provide insight into where a threat originated and how the malicious process or activity was created, providing security teams a comprehensive view of incidents and attack chains.

Finally, this research underscores the importance of understanding a macOS threat’s progression to not only remedy its current abilities, but to prepare for increased capabilities and sophistication of the threat. As threats on other OS platforms continue to grow, our security solutions must secure users’ computing experiences be it a Windows or non-Windows machine. By sharing our research and other forms of threat intelligence, collaboration across the larger security community can aid in enriching our protection technologies, regardless of the platform or device in use.

Alerts with the following titles in the Microsoft 365 Security Center can indicate threat activity within your network:

Look for file quarantine attribute removal for the specific packages involved in the campaign.

Look for quarantine event database enumeration through sqlite3 for the packages involved in the campaign.


The post The evolution of a Mac trojan: UpdateAgent’s progression appeared first on Microsoft Security Blog.