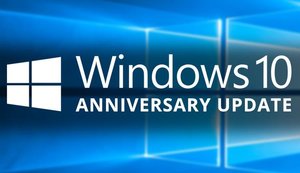 Having some trouble with your webcam? You're not alone. If you're a Windows 10 user who recently installed Microsoft's big Anniversary Update for the operating system, the update has rendered a number of different webcams inoperable. Microsoft representatives have indicated that a fix should be coming in September, and clever Windows users who don't want to wait for Microsoft's update are already trying workarounds to get past the issue.

"Windows 10 continues to have the highest customer satisfaction of any version of Windows. We have seen a small number of reports of unexpected behaviors following the Windows 10 Anniversary Update. Engineering and customer support are investigating these on a case by case basis and offering trouble-shooting tips as necessary. If a customer has any issues, we offer customer support at www.microsoft.com/support," reads a statement Microsoft provided to Gizmodo.


The problem centers on Microsoft's decision to prevent webcams from using MJPEG- and H264-encoded streams with Microsoft's new Windows Camera Frame Server. Said server allows multiple applications to access the camera stream—a change in the Windows 10 Anniversary Update—but Microsoft decided that this Frame Server should only receive an uncompressed YUY2 stream from your webcam.

So, any webcam that's attempting to use one of the two forbidden codecs will now hang, freeze, or generally not work. Microsoft's intent was to find the best solution that keeps one's webcam available to apps like Windows Hello and Cortana without having multiple applications decode the same webcam stream simultaneously (which seems inefficient, as Ars Technica notes).

"...MJPEG and H.264 being decoded / filtered out is the result of a set of features we needed to implement, and this behavior was planned, designed, tested, and flighted out to our partners and Windows Insiders around the end of January of this year. We worked with partners to make sure their applications continued to function throughout this change, but we have done a poor job communicating this change out to you guys. We dropped the ball on that front, so I'd like to offer my apologies to you all. We're working on getting better documentation out, to help answer any questions you may have," reads a post in Microsoft's Support Forums from Windows Camera Team member "Mike M."

Microsoft is planning to first fix the issue for the MJPEG codec, but it might need some extra time to try out a fix for H.264 with its various Windows Insider testers.

"Since it will take some extra time for the H.264 work to go through this additional layer of testing, and we would prefer not to delay the MJPEG changes, we will ship these two separately. You can expect the MJPEG media type work to reach you first," reads Mike M's post.

If you don't want to wait, you can also try out a fix proposed by software engineer Rafael Rivera. 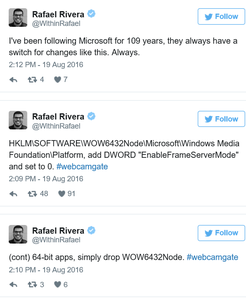